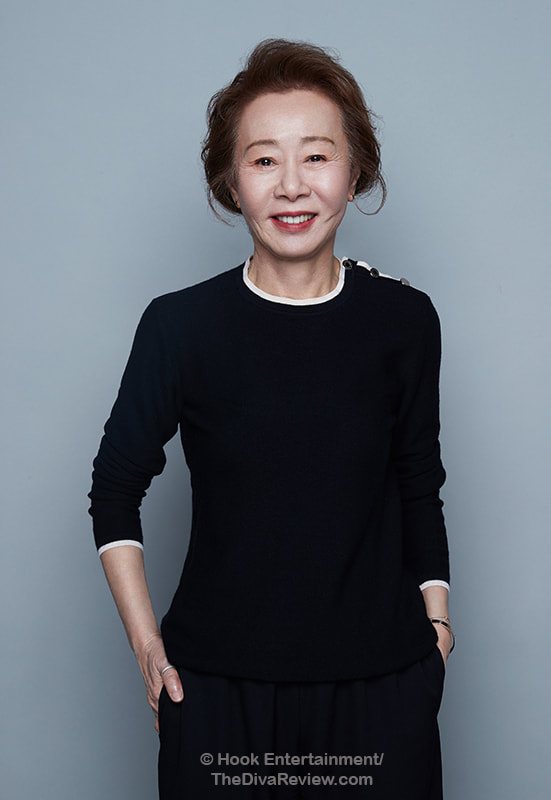 One of the Grande Dames of Korean cinema, Youn Yuh-jung has never been afraid of taking a chance.  Her 1971 feature debut in Director Kim Ki-young’s psychosexual thriller, WOMAN OF FIRE sealed Youn’s reputation as a bold maverick amongst actresses.  Nearly fifty years later, Youn makes her US feature debut as the matriarch of MINARI, Director Lee Isaac Chung’s semi-autobiographical opus; a role which has already won Ms. Youn many awards and new fans around the world.
Zooming in from Vancouver, Ms. Youn chatted with LMD about her long connection with Director Chung, the importance of supporting roles, and revealed the secret of being fearless.

Dig it!
​​
LMD:  You are not new to working on US projects {Sense 8}, but this is your first full-on feature.  What made you trust Director Lee Isaac Chung with this big step?
YYj:  Well, he, himself was first trusting me.  My dear friend introduced him to me during the Busan Film Festival.  He was teaching, he was on the faculty at the University of Utah.  He was a friend of my friend, and he asked her if he could have a Q&A with me and his students.  I said yes.  He was the moderator for me and the students, and his first question to me was about my first movie, which I made when I was 22 or 23, and I was very impressed that this young man remembered my old time movie. {Laughs} How could he remember or watch that movie?  So, he already impressed me from the moment I saw him.
So, he was going to talk about the movie, but none of the students were interested in my old movies, or my career.  I have a reality show in Korea that they named after me, YOUN’S KITCHEN, it’s called.  They all talked about YOUN’S KITCHEN.  So, I could see that Isaac was very disappointed, but he was nice enough to not interrupt them, or say ‘Please don’t ask that.’
Time passed by, and later, my friend, Ina {sp?} sent me a script, she said, “Isaac wrote this script.”  So, I was reading it -- at the time I got the script, it was written in English, so I really had a hard time.  After 30 or 40 pages on, then I called Ina back and asked, “Is it the real story of him?”  She said, “Yes.”  So, I said, “Okay, I’ll do it.”  That’s where we started.

LMD:  Having watched too many Korean dramas, I’m familiar with the trope of the spiteful, overbearing mother-in-law. With Soon-ja, as brash as she is, she really doesn’t interfere, or tell the children what to do. There is a fragility in her presence, because we don’t know why she was left in Korea, and if it’s possible that she could she be sent back. I view Soon-ja as someone walking on eggshells a bit, trying not to be in the way, while being herself.
Tell us how you struck that balance between her liveliness and exuberance and this delicate way she manoeuvres in the family.
YYj:  It’s all Isaac’s script.  It’s all Isaac’s work.

LMD:  Really?  Are you sure?
YYj:  Yes.  He did it all.  That’s why I liked that script, because he’s very honest and genuine.  Because it’s all done through the perspective of David’s eyes, the seven-year-old boy’s eyes; that’s what I liked about this movie very much.  It’s Isaac’s view of humanity and love that I was very impressed by.


LMD:  Playing a character with a critical illness is a challenge for any actor.  How did you research how to play MINARI’s Soon-ja’s stroke?
YYj:  My first question to Isaac was, “Should I just imitate your grandmother?” because he remembers exactly what she did.  So, I asked him, and he said, “No.  No, don’t.  Just do it your own way.”  So, he gave me the freedom, so I was very grateful.
Then I researched it, actually, I studied with one of my neurologists about strokes, ‘How should I act?’  I was sure I wasn’t going to have a lot of help from the studio, because it was an indie movie.  I prepared. {Laughs} Indie movie means you’re not going to have luxuries.  So, I practiced, and the doctor was kindly enough that he came to my house and brought all the YouTube things for me.  Then he, himself, would perform in front of me, “If you get a stroke on this side, then don’t use this side,” so he gave me the details.  I researched this character that far.
more with youn yuh-jung