​From his early days in films like Zhang Yimou’s TO LIVE, to titles like SHOWER, LET THE BULLETS FLY, and A TOUCH OF SIN, Jiang Wu has risen to become one of China’s greatest actors.  Jiang and Director Xin Yukun spoke with LMD about their thriller, WRATH OF SILENCE.
Dig it!

The Lady Miz Diva:  Congratulations on the Star Asia award.  How does it feel to receive it here in front of your New York Fans?
Jiang Wu:  I like New York a lot.  I’ve been collaborating with American filmmakers pretty often.  I’ve received three or four awards already in America; the first one was in Hawaii, and then I went to Los Angeles, and now this third one is here in New York.  So I’m hoping the fourth one will come very soon. {Laughs}

LMD:  What was it about Director Xin’s work or script that most impressed you to work with him on WRATH OF SILENCE?
JW:  The other two awards I received in America were for collaborations I also did with young directors.  I think young directors are very sincere in terms of making their first or second feature films, which gives me a lot of inspiration, especially when I would run into unexpected situations, and that is what I really like about working with young directors.
I see their passion; they are giving everything they have, their hearts are really into what they want to make, and I love working in those type of projects

LMD:  Your character, Chang, is a terrible person.  Do you have to find a humanising quality in your characters, and if so, what did you find humanising in Chang?
JW:  I think extreme evilness and extreme kindness, there is a very thin line between them.  Extreme kindness just might push into extreme evilness, as well.  So, even though this character is awful, as you said, he also has a very humanised side, where he tries to be kind.
For example, he goes to the school and he donates things to the kids.  However, if you look at the very thin line between the extreme evil and extreme kindness, I also think the donation part of his actions may be developing something that is more evil.
So, he is not a genuine character: His external actions and his internal thinking and feelings are not aligned.  So, if you look at his costumes, his hair implants, those external things, they are representing something else, but if you look at his shoes, they are cotton shoes, so maybe that represents more of the internal core of the character?

LMD:  He is quite flamboyant: His ostentatious outfits, with his curly hair implants, entire farms of mutton all over his office table, and even the way he moves reminds me of a villain from a superhero movie.  As I said, Chang is awful, but is there a bit of fun in creating this larger-than-life character?
JW:  Yes, I did think that way, because, for me it’s more lighthearted to play this kind of villain in a sort of comedic sense of humor, than being really serious in a serious film, because you have to go from the shallower end of the story to bring out what’s deep and what’s meaningful from the metaphors.  That gives the character multiple layers of color.  And I think if you think of the sense of humor is a little bit funny, in terms of his superhero villain-ness, then he also buries the deep sadness into his character.  Underneath the kindness that you may see, he is also burying his super evilness deep inside.

LMD:  There’s this very dark character, but one of my favourite roles of yours is as Dahei in A TOUCH OF SIN, who does some terrible things in the name of justice.  They are two extremes, but is that wide exploration of humanity, good, evil, and in between, one of the motivations behind your choice of roles?
JW:  So, yes, there is a grayscale in between the extreme evilness and the extreme kindness.  I think it depends on the different type of story, and the different type of character, and the different type of background that that character is situated in.  There are different ways to portray the kindness and the evilness, and I think for me to control the percentage of which is more, is my role as an actor.  That is up to me, in terms of interpretation.

LMD:  At the beginning of your career, you starred in a Zhang Yimou film {TO LIVE}, and have gone on to work with great director from China and Hong Kong including Jia Zhangke, Jingle Ma, Peter Ho-sun Chan, and of course, your own brother, Jiang Wen.  What is the most optimal situation for Jiang Wu to appear in a film?  What is the direction you respond best to?
JW:  Technically speaking, I’m not an actor who listens one hundred percent to what the director says.  If you tell me something has to be a certain way, I don’t believe in that.  So, for me, performing and acting is more about imagining:  If you can imagine something, something would exist.
So, for me, it’s more about communicating with the director, and seeing with the director wants, but also, I want to give him or her more than he imagined.  But still, I want to reach what he or she wants.
So, if I can imagine a detail that I want to portray, I will really try my best to persuade the director to try one or two times more, or even more to achieve what I want.  I believe some of my thinking is going to be helpful for directors.  For example, in SHOWER the movie, it turns out a lot of that what I wanted to persuade the director to try turned out to be really good.

The Lady Miz Diva:  WRATH OF SILENCE is a very unusual mix of action and drama, with a mute person as the main character.  What were the challenges of writing a character who falls into so many dangerous situations he could easily avoid if he could speak, but he cannot.
Xin Yukun:  In the earlier versions of the script, I actually arranged for the character to be able to talk.  He is very quiet in his personality, and he is a difficult person, but then after I developed the script several times, I realised that for the three different fathers who were from three different backgrounds, if I arranged for this character not to speak, a lot of the drama will become reasonable and justifiable.
That’s why I needed this character, but also I realised that this is a perfect metaphor for the group of people he represents, because they don’t have a lot of voice in the society.

LMD:  Song Yang does a wonderful job portraying Zhang Baomin.  We know Mr. Song from his martial arts films like JUDGE ARCHER and THE FINAL MASTER.  This film requires a lot of dramatic depth as the father searching for his missing son.  Please tell us what guidelines you gave him to help him prepare to play this mute character?  What made you feel that he could capture the emotional range needed to play Baomin?
XY:  Song Yang came in with a lot of curiosity for the character; he came to explore.  Then when he came into this project, he was actually not very confident that he could portray this character.
So, when we started the shooting, we spent about ten days to explore together.  So, we did some improvisation about how to portray this character, and then we found the perfect way after these ten days.  Because he cannot speak, so he had to use a lot more actions, with a lot more of his body and eyes.  And then after we found this perfect way of portraying this character, he gave me a lot more trust, and that actually gave me a little more pressure.

LMD:  Of course, I must ask about the gentleman next to you: Please tell us what about Mr. Jiang Wu fit your initial vision of Chang?  Did Mr. Jiang add anything to the character that you did not see in your script?
XY:  So, I don’t know if you notice, but in a lot of movies and television shows, when they portray these nouveau riche Chinese people, they always have this tiger portrait in their office.  And when I was imagining this character, I thought of Mr. Jiang Wu; that his face is so aggressive, and his aggression in his facial expressions resemble the tiger image that I felt he had.  So, I thought that if Mr. Jiang actually has this sort of characteristic in himself, then he will make the role very powerful.
So, when we reached an agreement about how to portray this character, and when he came to the project, he actually gave me a lot of hands-on help with how to create this character.  For example, he provided a lot of visualisation about what this character should look like, how this character should be played, and particularly, when I thought there was a specific shot that I wanted, I would always say, “Oh, this is the perfect shot. This is the shot that I wanted,” but Mr. Jiang Wu would always try one more.  He would say, “Oh, can I try just one more thing for you?”  And that one more shot would always turn out to be the best thing that I couldn’t even imagine, because as a director, you always focus on the details, and sometimes you lose the big picture in your head when you put that shot into a sequence.  Then, with his years and years of experience, he might not feel as comfortable with what I wanted in the details, so he always provided this one extra shot that would turn out to be very helpful for me. 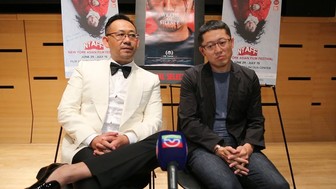