In Director Yoshida Keisuke’s THICKER THAN WATER, sibling rivalry lasts far beyond the playground.  Director Yoshida spoke with LMD about family ties, jealousy, and sadistically teasing the audience.
Dig it!

The Lady Miz Diva:  As with most of your films, you wrote the story and screenplay for THICKER THAN WATER.  What was its inspiration?
Yoshida Keisuke:  It wasn’t necessarily that I was inspired by one thing or another.  This film is actually my eighth film.  But what I did want to do was talk about a new emotional thing that I had never really dealt with before, which was jealousy, or envy, which is apparent in the film.  When thinking about what emotions I haven’t dealt with yet, it was through cancellation that I figured out that jealousy was what was left, and so, that was where it all began.

LMD:  I think a lot of people might watch this film and immediately wonder whether this is somewhat autobiographical?
YK:  I actually have an older sister, myself, which, to me, doesn’t feel like the same relationship that’s present in the film.  So, it’s not necessarily there.
However, I did have a working partner, who was a person I worked with for very long time.  He felt to me like an older brother and a younger brother at the same time.  I felt like I wanted to extrapolate on this relationship a little bit.

LMD:  I think you’re going to have quite a reaction to the film’s opening scene.  I thought there was a mistake in my screener, at first.  Did you mean to jostle the audience that way?
YK: {Laughs} Regarding that opening sequence, I do believe that there is a little bit of a trend in Japanese films to have that kind of cinema available, especially in the way they’re advertised.  And I feel a little bit of danger in that trend of having that kind of advertisement of films.
So, it was sort of my black humor to have that in there at the beginning.  I believe that a lot of Japanese audiences, when they saw this film in the theater, they were sighing, because they were saying, ‘Oh, another trailer like this.’  So, that was sort of my joke.  {Laughs}

LMD:  That sleight of hand in the beginning kept me on my guard and made me wonder if the montage of Yuria and Kazunari’s date wasn’t some weird dream.  However, when you realise that it was real, it put me in awe of Ms. Enoue Keiko commitment to her role.  She gave her all and then some to her portrayal.  How did you and she create her character?
YK:  Ms. Enoue has the ability to read into scripts very well; so, she actually brought a lot of her character by herself to the film.  That said, regarding the dating scene, I think it’s a shot in a way that maybe suggests that it could be a dream?  However, I do feel almost that if Ms. Enoue’s character and physique was your stereotypical cute character, it would’ve just looked like a normal, beautiful scene, or at least be thought that way.  And so, that idea of subverting the viewer’s expectations was sort of a sadistic idea on my end.

LMD:  It’s interesting that you say that in Enoue-san brought a lot to the character.  Was this her first film?  Was there anything in some of the outrageous things that we see her do onscreen that perhaps she demurred at, or said ‘I can’t do this?’
YK:  Generally speaking, she, herself, is a comedian who works with a lot of skits.  And so, because she does a lot of skits, she does tend to have an over-the-top way of acting.  I wanted her to start acting in a way that was closer to realism.
So, in order to get to that balancing act, what I started to do was a subtracting in the direction that I gave; but again, she is a very intuitive person, so she really understood that very quickly.  So, even though it is in some way, acting for the first time for her, she has done acting within her work, through her work with her skits, so it was easy to work, in that sense.
Regarding the scene where she dances, I asked her to dance in a way that it could be a little bit cringey, and she sort of made up that dance, herself.

LMD:  But she dances great!
YK:  {Laughs} I think within her work in comedy, she had been doing some dancing, already, so probably it wasn’t so new to her.

LMD:  Actually, her dancing gave me an observation about Yuria.  She is convinced that her loneliness is because she isn’t good looking, but she also doesn’t do much to help herself.  She’s got the sister who could give her some tips on fashion and makeup. Yuria’s smart, and a great dancer.  She seems to want to blame others for her unhappiness, but avoids facing her part in it.  Is that assessment correct?
YK:  Regarding her looks, sure.  I think one thing to be said is that her younger sister is said to be cute all the time.  She has to hear that all the time.  And that, in itself, is constraining Yuria in many ways, and perhaps that also makes her project her own ugliness onto herself, and see herself as ugly, even though she’s very skilled in many ways.  I think she’s unable to see her own happiness, and see her own skills, because she’s viewing herself through this light.

LMD:  Nobody in this film is what they seem. For all her brains, Yuria is hateful toward her sister.  Mako is petty, but defends Yuria.  Takuji is a thug, but desperately wants his family to love him, and Kazunari really is a terrible person in the guise of a salaryman.
Normally, when layers like that are revealed, it means the characters will move to a better place at some point in the story, but again, there’s some sleight-of-hand, and they snap back to form.  Is that your comment on human nature?
YK:  After all, at the end of the movie, you sort of hear them talk about how people don’t really change, at least so quickly.  So, sometimes I watch other films where the change really happens, I think, ‘Well, isn’t that too much of a change in such a short period of time?’  So, fundamentally speaking, I sort of think people don’t change all that easily. 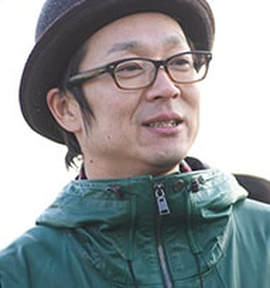