Starting her career in 2002, as part of a CantoPop girl group, Stephy Tang went on to become one Hong Kong's most popular singers.  Acting followed in a host of light rom-coms and crowd pleasers.
With THE EMPTY HANDS, Tang shows a new depth and rebirth as a serious actress in her role as the rebellious daughter of a karate master.

The Lady Miz Diva:  Congratulations on the Rising Star Award.  How does it feel to be a Rising Star after almost two decades in the entertainment industry?
Stephy Tang:  When I first heard that they are giving me this Rising Star award, I got a little bit confused, and I had some thoughts, because I am no longer a new actress, and the time that I was given a new actress award was way past.  But it also made me feel like I’m going back to my youth, when I was getting all these awards in Hong Kong, and this is the first time I’ve received any awards outside of Asia, and especially in America, in New York.  It is the first time I’ve received an international invitation, which made me really excited.  I can’t really believe this.

LMD:  It’s interesting that you say it felt like going back to your youth, because it feels like THE EMPTY HANDS signifies a career rebirth for you; Stephy Tang, Version 2.  I wonder if that’s how you felt when you took such an unusual role?
ST:  I wouldn’t say that it is an intentional rebirth of my career, because all these years, all these movies that I’ve made have given me increasing growth and experience.  It was always about growth; every different movie, every single movie I gained a little bit more experience.  Then all these experiences and years of acting culminated in this film.  It wasn’t really an intentional breakthrough, or intentional remake.
But I also think that being an actress is more than being good-looking, so you need real-life experience, and also your point of view about life, that is what makes you look different, actually, and that came with years of experience.

LMD:  Talking of how being an actress is more than being good-looking, in THE EMPTY HANDS, you’re all beaten up.  Even the poster shows your face covered in blood.  Not only that, the character is very flawed in her personality.  You are primarily known for having a glamorous image.  Did you have any hesitation at all in shedding that skin to play Mari Hirakawa?
ST:  I don’t really evaluate whether or not a role is pretty when I’m choosing a role.  It’s more really about the feeling about this role, for me.  Also, I try to take myself out of the picture when I’m trying to act.  I really do not really consider as trying to be pretty, or anything like that.
But when I was starting as a singer who can act, I may or may not have had some baggage back then to consider if my image is good.  But when I transitioned to an actress who can sing; I consider myself more of an actress, I won’t even take all this baggage into consideration, anymore.  I realised that baggage is not really relevant to an actress.  If you really believe in the role, if you believe in yourself, or the storyline, then being pretty or not is no longer important.
And for me, this character is really the one that I invested the most of myself in, because first, she’s closest to my character in real life, and second, because the training process was so long, it really helped my understanding of the character, as well.

LMD:  Your fans know that you have always been athletic.  You even have your own volleyball team.  What was different for you with regard to the training you underwent for this role?  How long did you train, and how many different disciplines did you learn?
ST:  I trained for half a year.  Before this film, I had zero understanding about what karate is.  I didn’t know anything about karate, so we started from the very basics, which I think is the most difficult.  So, I thought that training could’ve been a little bit longer, because we rushed and rushed to understand what karate means.  For me, I think even one year would not be enough, because you need at least a year or two to understand the basic understanding of karate.
I also trained for boxing, because of the K-1 competition scene, but regularly, I train for a volleyball team, and that keeps me fit for my energy level and everything.  I did so much sports during that period that I could no longer wear a skirt. {Laughs} 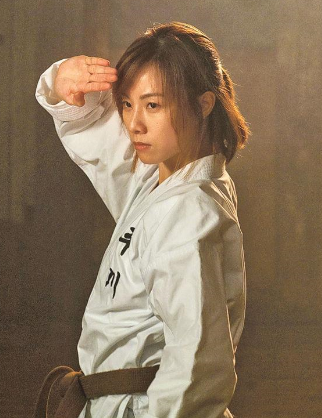