For someone whose filmmaking career began in the 1970s, including such amazing fare as KAMIKAZE TAXI, BOUNCE KO GALS, KAKEKOMI, and THE EMPEROR IN AUGUST, Director Harada Masato is showing no signs of slowing down.
SEKIGAHARA, Director Harada spoke with LMD about his influences, the importance of strong female characters, and why his Lifetime Achievement Award is right on time.

The Lady Miz Diva:  You’re here at NYAFF to receive the Lifetime Achievement Award. Sometimes when filmmakers who are still very active receive such an award, they have mixed feelings about it.  Do you feel like perhaps it’s too soon?
Harada Masato:  Timing-wise, it was really perfect for me.  These days, there are so many overrated directors, and I’m one that is underrated. {Laughs} I just continue to evolve every film I make, and this film, SEKIGAHARA, is the biggest budget film I ever directed.  So, it’s very nice, great timing, that I receive a lifetime achievement award right after SEKIGAHARA.

LMD:  Yet, it feels like you are accelerating after all this time, as opposed to slowing down.  That is very unusual.
HM:  {Laughs}

LMD:  What is the secret of maintaining youthful creativity?
HM:  Because I’m paying great respect to those great filmmakers.  For example, starting from Howard Hawks, John Ford, Akira Kurosawa, Ozu Yasujiro, Ingemar Bergman, Alfred Hitchcock, David Lean, and even Elia Kazan.  Elia Kazan: A Life, the book, taught me a great deal; how to behave as a filmmaker.  I constantly think about what Howard Hawks would do, or what would Akira Kurosawa do whenever I am writing screenplays, those approaches.  Occasionally, I go back to those films:  SEVEN SAMURAI, I’ve seen maybe more than fifty times, Hawks’ RED RIVER, or HIS GIRL FRIDAY.  I’m a film buff, basically. {Laughs} I think that makes me young all the time.

LMD:  With SEKIGAHARA, you are bringing a monumental historical moment to movie screens.  What was the most important aspect to highlight that perhaps you had not seen emphasised in other films?
HM:  Well, actually most of the Japanese youth, they don’t know what the Battle of Sekigahara was all about.  And they certainly have no idea who Ishida Mitsunari was.  So, I wanted to do some kind of justice about what Lord Ishida contributed, and what if he won the battle?  The Japanese could have been different.  Or what if we have a politician with Ishida’s mind?  Japan would be much, much better today.
So, that kind of question I wanted to raise, but at the same time, the book, Shiba {Ryōtarō}-sensei’s book was published in 1966, and ever since, it’s sold five million copies, so it’s a long time bestseller; he’s someone like James Michener in the States.  The book itself is like Tolstoy’s War and Peace, there are so many characters, and so I had to reduce to a certain number of people, but there were still too many for contemporary movies.  So, I just wanted to take a different approach.
For example, one of my favorite films, THE GODFATHER; because there are certain similarities between Michael Corleone and Ishida Mitsunari.  Structure-wise, THE GODFATHER has this beautiful wedding sequence in the first twenty minutes, in which important characters are introduced.  So, I thought about up until the Sanjo riverbank execution sequence, it’s exactly the wedding sequence of THE GODFATHER, where all those important characters are being introduced.  Particularly, the Sanjo Riverbank itself, it’s the first time you witness Ishida and Hatsume together, and also Shima Sakon, and Ishida’s nemesis, Lord Kobayakawa, is there.  Lord Kobayakawa and Lord Ishida, they obviously met at the Sanjo riverbank, and they argued about the execution of Princess Koma and the others.
Once I came up with the idea, everything was rather smooth and easy.  I’m coming from the old school of filmmaking, so I strongly believe in the bookend effect:  In THE GODFATHER, the opening sequence ends with the family photo, and the film itself end with Kay watching Michael close the door -- like a shutter -- the doorframe is a photo frame, so it’s a bookend effect.  And so this film started with the Sanjo River as a prologue, and it ends with the Sanjo riverbank with another execution.
So, when the structure came up, everything became easy to put all those characters in there that were involved, and it’s just before the final execution, that is the Battle of Sekigahara episode.  I checked all those Japanese samurai films with battle sequences, and still, SEVEN SAMURAI was the best.  And SEVEN SAMURAI was only 100 farmers and families fighting against 40 bandits, right?  So altogether, it’s only 200 or so people, or less.  In SEKIGAHARA, you have to deal with some 200,000 people. {Laughs} But still, the SEVEN SAMURAI battle sequences were great help, and I just wanted to recreate that kind of classic atmosphere.  Then I also checked all those 60s epic films from Europe or the States, and also when I saw ALEXANDER NEVSKY by Serge Eisenstein, a 1933 film, it had a beautiful spear fight, so I borrowed that fight there.  Also, how to die on the battlefield, Orson Welles did it beautifully in CHIMES AT MIDNIGHT, so I borrowed those frames and then I put them all together.
Now, I wanted to challenge the musical score itself by not only using typical Japanese music, but what if I used some 19th century classics like Frederick Delius?  Those were the kind of ideas I put together, and then the texture of the film was there.
The most important thing was the characters; when you can tell what about the truth of this characters.  The author did a certain justice about recreating Lord Ishida as a rational, logical person, unlike any other Japanese historical characters.  His way of thinking is more of contemporary Westerners, and thus, I understood Ishida’s character quite well.
Also, the new analysis about Lord Ishida’s nemesis: Lord Tokugawa is so well known, so I didn’t touch him, except I wanted to create his character sort of three dimensionally, and more attractive.  I also wanted to say something new about, Lord Kobayakawa:  Ever since Sekigahara, he had been treated as the number one traitor in Japanese history, but in reality, it was something like the character I showed in this movie, and it’s the first time that so many people would understand who he was.
Plus, during this preproduction period, researching all those Japanese films and everything, I was so frustrated by the weakness of female characters.  That’s something I wanted to put an emphasis on in this movie.  For example, Sakon’s wife; in the book, there’s only one line introducing her -- that his wife was coming from a doctor’s family -- but I researched, and it happened that Hanano and her sons actually went to Sekigahara and just formed this frontline hospital.  Now, talking about this frontline hospital in the period of Jidaigeki, there are no other Japanese films that depicted that kind of element on the big screen.  So, this was a challenge, and I wanted to show it.  So, in that way, I created more of those female characters that are three-dimensional in every which way.

LMD:  We are now going to talk about female characters because you opened the door.  In all the films shown at the festival, you have very strong, self-determined women.  Whether it’s the warrior Hatsume in SEKIGAHARA, the women of the temple in KAKEKOMI, or even the prostitutes of KAMIKAZE TAXI; you show us women who are not content to be rescued, or decorative, and are truly strong and realistic, but not necessarily hard.  Why are you able to do what so many filmmakers can’t?  Is it important to you as a writer to show us that realistic interpretation?
HM:  Um, I always feel for my wife. {Laughs}  She has a strong character. {Laughs}  I learned those charming, strong female characters from Howard Hawks as well.  HIS GIRL FRIDAY is a marvelous film; and he changed the sex of the male character to a female.  He also pays great respect to the female characters, like in RED RIVER:  I mean without Joanne Dru, the John Wayne character and the Montgomery Clift character, they wouldn’t reconcile.  Every other film always had these strong, charming women.  And in that way, I started out my career as a film director, and in private life, my wife is always bitching about what kind of female character I’m putting in the film. {Laughs} 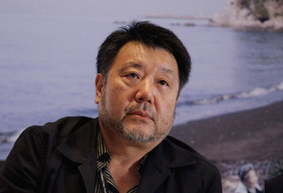