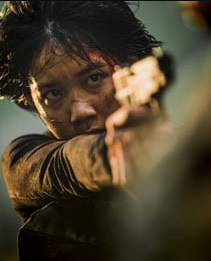 The Lady Miz Diva:  Mr. Gang, it’s nice to see you again.  It’s been a while since we met at the 2017 New York Asian Film Festival.

Gang Dong-won: Yes, I remember.  What did you think about my English improvement?


LMD:  Well, I had meant to ask about it during this interview, but since you’re asking me now…  Having heard you speak English three years ago, I was really impressed.  Your English line-readings in PENINSULA were better than the native English speakers.
GDw: {Laughs} Wow, thank you so much.


LMD:  I know you studied for a long time; you worked hard to learn.
GDw:  Yes, and I was in LA for a year.

LMD:  I want to know about that, too.  How was that?
GDw:  It was a really good experience.  We are still working on something.

LMD:  What happened with TSUNAMI LA, the Hollywood movie you were meant to make?
GDw:  The shooting was postponed because of some situations, and because of the coronavirus.

LMD: Tell us what made you want to join PENINSULA?
GDw:  Actually, my best friend in the industry is the editor of PARASITE {Yang Jin-mo}.  He called me one day and told me that Yeon Sang-ho wants to meet me, and I said “For what?” {Laughs}  He said he was actually planning to make a sequel to TRAIN TO BUSAN.  So, I was like, “Oh, TRAIN TO BUSAN?  A sequel?”  Because I liked TRAIN TO BUSAN a lot, but making a sequel to a film which made a big success before is not very interesting to an actor.  I’m sure for other actors, too.  But I wanted to meet him, anyway, because I wanted to hear what he was visualising about the movie, so, we met.
I was actually personally very curious about the director, because {Laughs} I met him once at some afterparty of my movie.  He came with Director Na Hong-jin.  Actually, Na Hong-jin called me like “Where are you?  I’m with Director Yeon Sang-ho.  Why don’t you come here?”  I said, “Oh, I’m sorry, but I just finished my movie today and we are having a party today.”  And he was like, “Okay, then we are going.” {Laughs}  And they came, but actually, we didn’t talk that much because they both were a bit drunk. {Laughs}  So, we couldn’t talk that much.
So, yeah, I met him with my friend the editor.  First, I heard about what he was thinking about the sequel of TRAIN TO BUSAN, and then he shared with me about the story, and about his vision.  I was very impressed about it, and I became very interested.  Then he gave me the script the next day and I read the script right away.  I really liked the script, actually, because first of all, PENINSULA is very different to TRAIN TO BUSAN.  That was like a disaster movie, but PENINSULA is more like a post-apocalyptic movie.

LMD:  One of the most interesting about your character, Jung-seok, is that he is very flawed; he is not perfect, at all.
GDw:  He’s not, he’s not.  He’s the strongest guy in the movie, but the same time, he’s the most normal person in the movie.

LMD:  Just before this film, you played someone who was more like a superhero in ILLANG; a character who seemed very hard, detached and inscrutable.  With Jung-seok, from the moment he drives away when he could help the mother and baby, and he leaves his sister to die in the boat, he’s consumed by guilt about it four years later.
Was part of the attraction of playing Jung-seok that he was so much of the opposite of that previous character?
GDW:  Yeah, that is kind of a very interesting part about Jung-seok.  He got to escape.  He escaped the Korean peninsula after the disaster, when everyone’s died, but he loses his family.  He is very reasonable, like the other characters in TRAIN TO BUSAN.  He’s quite reasonable, and also he’s a practical and logical person.  That’s why he didn’t allow the family -- Min-jung’s family -- to come into the car.  But then he lost his family, and then he lived his life in a foreign country as a refugee, and then he becomes very negative and disaffected.
I’m sure that he met many people in Hong Kong that tried to help him, but maybe he refused.  I’m sure he was in denial.

LMD:  One of my favourite moments is the dream, where Jung-seok is reliving the moment he abandons Min-jung…
GDw:  That line is from me! {Laughs}

LMD:  You’re going too fast!  I was gonna say that! {Laughs} In the dream, his sister says “Jung-seok, why are you the only one alive?”
GDw:  Yes, "Why are you the only one alive?"  That line is from me! {Laughs}
The director wanted to add some scenes from Jung-seok’s trauma, so I told him maybe if the sister said to him, “Why are you a survivor?  You are the one who is alive, but you are alone.”  Or something like that, it would be very painful to Jung-seok.  That’s what I said, then so he added the line.