The Lady Miz Diva: Mr. Lam, congratulations on the honour.  Dan Craft was a man who prized action movies, and he would’ve been thrilled to give you this award.  How do you feel about being here with the NYAFF audience who know your work very well?
Dante Lam:  Of course, I’m very happy that the film is selected to be shown here, because, after all, it is a Chinese movie – an action-packed Chinese movie.  It was quite a surprise to me actually,
And because many Hong Kong movies are martial arts-focused, whereas this movie features more gunfights, it is more similar to Western films.  In a sense, that’s what surprised me that they enjoyed this.

LMD:  OPERATION RED SEA was released during Chinese New Year, which is typically a time for very light family films, or romances and comedies.  You made such an intense film with close-up violence, and body parts, and blood.  Was it always your intention to release this very different New Year’s film at this time?
DL:  This is a question for the producer! {Laughs}
Candy Leung:  Actually, you asked the right question; it was our fear before.  When we were doing post {production}, I deliberately tried to push the release date to later in the year, {Laughs} because for both of us, we were worried about Lunar New Year.  It’s actually family days; they would like to watch some comedies.  Nothing like this, with violent and bloody scenes, can satisfy them.
But when the VP came to our office, they viewed the longest version, which was 188 minutes, and then he got tears in his eyes.  He was very touched by the content.  Then after the movie, he immediately made the decision that night.  I had such doubts about it, I said, “No, no, no, no, it’s not the right time,” but they really had confidence about it, and they gave us the money.  I cannot turn them down. {Laughs} Then we went for it.

LMD:  It really is an epic war film on a huge scale.  Please talk about putting the film together from a logistical point of view?  I’m particularly interested in the Chinese military’s involvement and cooperation?
CL:  Yes, this was the first time, and I don’t see that we will have a second chance to cooperate with them anymore. {Laughs} It is quite difficult, because, speaking for ourselves as filmmakers, we actually enjoy the freedom of creation, and also production.  Production is strict; we have to work out a schedule, and according to the budget.  We have to wrap everything within target dates, and also the money, but, if there too many surprises, you’d say, ‘Oh, okay, forgive my innocence.’
The Marines are more strict than we are.  Whatever we committed to, we could never change.  In the process of the shooting, when we collaborated and there happens to be some argument about arrangement – because this was really our first experience – but then to the Marines, it’s a no.  Once you say you want something, you cannot change.
For instance, one day, when we predicted a typhoon was coming, and I canceled.  I’d rather cancel the call for tomorrow, but they said no.  Once the call was in, they already arranged for four warships to go out.  All the departments knew it; even though there was a typhoon coming, we needed to go out and come back with it.  Really, that was the first time we experienced it.  At that moment I realised that the military is really strict. {Laughs}  But then, at the end of the day, I think for both sides, we all learned something; to me it was obedience and commitment.  To the Marines -- I think because we are strict, too, our strictness is when the director needed something; we needed to have a certain answer that is accurate, all the dates and everything should be very accurate: They have to take into account the history, the details of the warships, we had to know all that.  So, I think we all learned from both sides.

LMD:  You literally have all four elements in this film; sea battle, air operations, ground combat, and fiery explosives.  What in terms of film was your biggest challenge to arrange?
DL:  To be honest, this type of movie, these kind of topics don’t come by in the Hong Kong movie industry very frequently.  It’s very rare.  In fact, I would say it never happens.  So, I really saw this is the only chance for me to direct a movie like this, and I really like this type of movies, personally.  So, when I got the chance to make this movie, I just threw in all the things that I have dreamed about, and I have watched, and rolled it up into the same movie. {Laughs}
There were definitely a lot of difficulties.  Like I said, I’ve never done a movie like this before, and there were a lot of big scenes with huge setups, and the movie is also quick tempoed.  So, when we brought the crew to Morocco to shoot, none of us had any experience to shoot there, so Candy and I had to both be very flexible in our problem-solving. 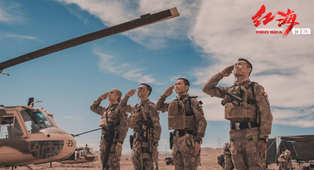