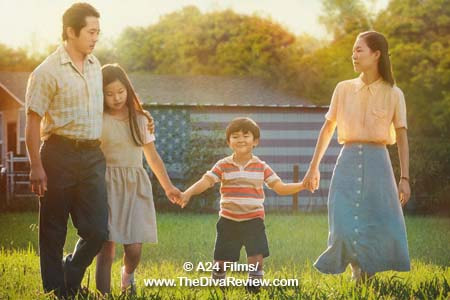 LMD:  While MINARI is about an immigrant family making their home in the US, it has universal qualities that anyone can appreciate.  Could you please talk about some of the aspects that anyone around the world can enjoy about this story?
YYj:  During the interviews, I found out that we are all the same people.  I thought that maybe there were some scenes between the grandson and Soon-ja, like when she tries to feed him the chestnuts {chewing for the child} -- that scene, I’ve actually seen many Korean grandmothers do that when they visit the US -- so, I was not sure if it was okay with somebody else.  But I found out today, one of the Spanish interviewers said she had the same experience where the grandma chews the walnut and gave it to them.  But I’m sure that the grandmother’s love is universal.
Sacrifice; that they think love is sacrifice.  That’s true love.  And they think that they’re doing their duty, but it’s more than duty.  She sacrificed, and of course, all parents, they sacrifice to give their children a better future.  So, it’s all universal, I think, all of it.

LMD:  One motif that’s really beautiful is when Soon-ja introduces the minari seeds into that marshy area, and basically says, ‘This is the right place, it’s just going to grow.’ and the plants eventually flourish.
It feels like a theme of the movie, to not try so hard, just find some good ground and let nature happen.  Is that what Soon-ja was saying when she brought her grandson, David there?
YYj:  Of course, it’s the grandma with experience, living that long period of time, she failed and she succeeded, I’m sure, in her life, maybe, but she gained wisdom.  She probably learned from the generation before, and then she knows how to plant the minari; which place is a suitable place for the minari.  That’s a grandma’s wisdom, I think.
What I learned about minari while we were shooting, which was we were just eating it; we just thought maybe it’s like a water celery, or watercress, but it has a special, particular fragrance, minari, that usually when you are young, when you are a child, you don’t eat it, but when you get older, we eat it often.  Not every time, like kimchi, but we eat it very often.
I didn’t think about that vegetable until I made this film, and then I learned that and a lot of things from Isaac about this minari.  It will clear the soil, and it will clear the water, and if you plant it, after the first year, it’s not coming back, but from the next year, it’s coming back as a vegetable, and then it grows forever.  So, that I learned.  {Laughs}

LMD:  Kim Ki-young, Im Sang-soo, Hong Sang-soo, your wonderful work with Kang Je-gyu and E J-yong, you’ve worked with some of Korea’s greatest directors, and now, young American Director Chung.  Is there a similar quality, or creative line that runs through those directors that you are drawn to?
YYj:  I don’t think they have a connection, or a similarity together.  All of them are all different.  But, when I choose my script, maybe, there is some similarity because of the script, but their personalities are all different.

LMD:  Despite working with legendary filmmakers, you still appear in projects by newcomers.  Is it important to you to encourage new talent?  What is the motivating factor in what you will appear in?
YYj:  During these interviews, I discovered that maybe it’s in my genes?  I like to try out new things.  I don’t want to just do the same thing over and over, because it makes me bored.  I liked trying new things, that’s what happened to me.

​LMD:  This is a movie with a lot of meaning in stillness.  A lot has to be said without saying anything, particularly in Monica’s relationship to Jacob.  How did you and Steven Yeun work at being able to have entire dialogues without saying a word?

HYr:  I thought that this couple would’ve tried to talk to each other for a long time until they gave up.  And they were doing things intentionally, knowing that they knew the other wouldn’t approve, or it would make them unhappy.
I think the silent treatment is the worst punishment that you can give.  That’s why Monica was intentionally silent around Jacob a lot, because he would never do things that she wants, and that was her way of protesting.  Nevertheless, she had the firm belief that the family has to stay together, and the big basis of that to make that happen is her love.

LMD:  The film's silences speak volumes.  This is not remotely an action film, but by the time Monica and Jacob's frustrations build up to a breaking point, that moment is like a bomb going off -- very quietly.
MINARI seems like a very tightly-produced project.  Did you actually have a lot of time to work with Steven Yeun on those scenes?  Did you have a lot of rehearsal time with him and the rest of the cast?
HYr:  Like you said, this was a very tight production, but we didn’t have a lot of time on set, so we tried to keep the time on set to a minimum.  So, it was when the camera wasn’t rolling, we got together in the Air B&B that Youn Yuh-jung and I were staying, to have a lot of conversations to prepare us, about why did they come to America?  Why did Monica fall in love with him?
Until that moment she expresses that she might leave with her children; it wasn’t until Jacob put that seed in her.  It was when she was washing him in the bath, Jacob tells Monica, “You can leave if you want.”  It was that moment that really first got her to think, ‘Maybe that’s something I can think about?’
Until she heard that coming out of Jacob’s mouth, I don’t think she would’ve even thought about leaving the family.  It was only when Jacob chooses the farm over the family, she realises that something is terribly wrong, and in order to protect myself and my children, I need to make a decision here.  I believe that’s why the energy that was conveyed in that scene was so strong, for that reason.