Men On The Dragon

A Hong Kong tradition, dragon boat racing shines in the spotlight of screenwriter Sunny Chan’s directing debut, MEN ON THE DRAGON.  Director Chan, and rising star, Jennifer Yu, spoke with LMD about bringing the sport to the screen.
Dig it!
The Lady Miz Diva:  Director Chan, you’ve been known as an in-demand screenwriter for a long time.  What was it about MEN ON THE DRAGON that made you say, ‘This is the one I want to direct?’
Sunny Chan:  I think for every film lover, their ultimate goal is to become a film director.  I finished the script a long time ago, and I always had this goal to direct my own work.  So, I started thinking about which script I should make into my first film?  So, I started looking over my past work, and I found this script, and I succeeded in promoting this film in order to make it into a film.

LMD:  You are closely associated with your work with director Joe Ma.  What if anything did you learn from him that helped your directorial debut?
SC:  Joe Ma, as you know, is my mentor, and my master in the film industry.  I finished writing this script when I was working with Joe Ma.  After I grew up a little bit in the film industry, I had made connections throughout the years, and I met the film partners that I needed for this film throughout the years of working in this industry, and that’s how the project came together.  But, after I gathered the team, I thought, maybe it’s time to invite Joe Ma to become the producer of this film.  That would be the perfect team in order to finish this project.

LMD:  What was it about the sport of dragon boat racing that made you think it was a great framework to tell the story of the characters?
SC:  Dragon boat is a very Hong Kong sport.  It has a lot of the Hong Kong characteristics, or personality in the dragon boat, because, you know, Hong Kong people like to improvise.  There is a saying that if you are really in a hurry, you go to the Buddha and you beg the Buddha at his feet.  So, you don’t go to the temple until you really need it.  So, there is a saying like that.  It’s a summary of how Hong Kong people improvise whenever there is a need, right?
Other sports like soccer, and other things, you have to play them from a really young age:  You really have to train for really long time in order to be good and to be professional-ish.  You are talking about either someone with great talent, or someone who trained very hard for years, right?  But with the dragon boat, no matter how old you are, no matter what type of physical status you are in, as long as you train yourself really hard for six months, you can sort of participate in a professional-ish level of competition.  So, that is part of the reason why I did it.  That really reflects the Hong Kong personality in that way.
The second reason is there are twenty people in that same boat, and everybody comes from a different background.  They have different life stories, and different situations, but as long as you play on the same beat together, and try really hard as a team, you can succeed in this competition.  That is part of the reason why I chose this topic for the film.

LMD:  Ms. Yu, what intrigued you about Dorothy?
Jennifer Yu:  So, traditionally in Hong Kong, dragon boat is a man’s sport.  Men are considered to be good at it, and women are not.  So, I think to tell people this is not true; this character made that statement.
Another challenging thing was to get these middle-aged men to listen to her, right?  So, she is a young woman who is teaching them how to dragon boat, and teaching them something that is traditionally done by men.  She is very mature, which is the foundation for her to make this change, because the men, even though they are older -- they are more senior -- they behave immaturely.  They behave like kids, they like to play.  That is the foundation why I think this character makes sense, because she is very mature in her mind.

LMD:  You’re still a relative newcomer to film.  What was the most challenging aspect of the role for you?  The physical aspect and the training you surely had to endure, or conveying Dorothy’s emotions?
JY:  First, is the physical aspect.  As you know, in the film I’m playing the trainer, and I needed to be better than the other crew actors in the group.  So, even though the film company arranged training together, I felt that I needed to be better than the other characters, so I found myself a really experienced coach, who taught me how to dragon boat.
Also, a lot of people may think that as an actress, after making this film you would get very tanned, which is considered not as pretty in Asia.  You will get a lot of muscles and your appearance may change a little bit, because the Asian perspective of pretty is very different than here.  But I think as an actress, appearance is not that important to me, and I am very prepared psychologically to get tanned, because this is the film I’m trying to make -- of course I’m getting tanned.  I also found personal trainers to make me look like an athlete, so I would have muscles and everything.
As for the emotional aspect, I actually learned how to yell at people from the professional coach.  I am quite a submissive personality, if you say; I always will listen to other people.  But in this film, I needed to tell them what to do, and I was pretty bad at that.  So, the professional coach, who actually coached dragon boaters, that person taught me that I needed to have the attitude to talk to the rowers.  So, he brought me on the boat and he put me on the stand, to yell at people who had a lot of experience dragon boating.  So, was put on the spot and he said, “You are too soft to them. When you are in the water, you can’t do that.”  So, he pushed me to be assertive and more assertive, and that was the training, as well.
There was the technical part of the training, and there was also the emotional part of the training, and I really enjoyed myself through the training.


LMD: You’ve only made a few films, yet your choice of role has been impressive. You are here playing the strong, determined Dorothy, and you also appear as a troubled student in Jevons Au’s DISTINCTION.
JY:  I want to try everything.  I think that the perks of being an actress is you get to live a lot of people’s lives, you get to try a lot of different things.  I think for me, the entertainment star and being an actress; yes, of course they are related because you act, and you are considered as a star in your film, but for me, my goal is really for the audience not to recognise me anymore in the movies.  Because as a star, you want people to recognise you, but as an actress in the movies, you don’t.

LMD:  What would you like MEN ON THE DRAGON to say to the New York Asian film Festival audience?
SC:  Everybody in the big city, they have difficulties.  Living in the big city, I think everybody is challenged in their own different ways, as well.  I don’t know about you, but I feel like everybody may feel little bit helpless living in the big city.  You are so small in the big city.
The other day, I was in Times Square, and I was looking up to those big screens, and I was wondering if life in New York, is really that wonderful?  That applies to Hong Kong, as well.  We are talking about Hong Kong as like a wonderful city, but life in Hong Kong, is it really that wonderful.
So, the message I want to send to the New York audience is that the world we cannot change, even though everything around us is changing so fast.  We cannot influence the world that much.  But for ourselves, if we find our own beat, and find our own rhythm, we can bring out the best of ourselves.
JY:  He is talking about life, and now I will talk about dragon boat.  So, I think a lot of people have a misunderstanding about the sport of dragon boat racing, and thinking that this is a professional or ancient game.  But I want to say that a lot of the nonprofessional people participate in this game, right now, so people who have a job, or people like stay-at-home moms, and others, they all are very passionate about it, right now.
They go to different countries to participate in the racing.  They’ll form a team and go to different races around the world.  I want to promote the sport, and I would like to have more people try it around the world, and have this sport become bigger and bigger. 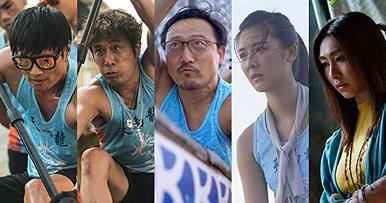