An invasion of a secret world of women sets the stage for high tension in Director Moët Hayami’s KUSHINA, what will you be. Director Hayami, Star Tomona Hirota, and Cinematographer Ryo Muramatsu spoke with LMD about the art and inspirations behind the film.
Dig it!

The Lady Miz Diva:  Please tell us about the inspiration behind KUSHINA, what will you be?
Moët Hayami:  It actually is inspired by the relationship that I, myself, have with my mother.  There’s is one facial expression that she had made had made a lasting impression on me, and that was all that inspired this film.

LMD:  The look of the film is stunning.  The nature images are beautiful, and we feel immersed in the world of the mountain commune right away.  Tell us about the visual design you had in mind, and what you wanted it to convey?
Ryo Muramatsu:  The director originally suggested that she wanted to take this film almost as if they were shooting a painting each time.  And so, after reading the script, I felt that this was a very appropriate way of approaching the film.  So then, together, we would visit museums, and look for motifs and ideas.  That was the process of heading into filming.
MH:  In shooting the film, I was thinking about, why place the camera somewhere?  What should be happening within the frame?  These questions I had in my head.  And then we did indeed go to the museum as our DP is saying; there we found an artist called Frederic Leighton.  In his paintings, there are a lot of details, and there is a lot of storytelling that happens within the frame:  There is a lot of wonderful lightness and darkness, a lot of contrasting that was present, and those things had inspired us a lot.

LMD:  With that beautiful imagery interposed with the shots of Sokou’s rosary.  Was she looking for a sort of paradise?
MH:  First of all, thank you for noticing the rosary, because not many people do notice it up front.  So, I thank you for that. {Laughs} Of course, she is, within the film, sort of the most modern, urban character that appears in the film.  She’s also very knowledgeable.  But regarding her Christianity, this is something that she didn’t choose herself, it was, in fact, coming from her mother; so, it might not be the best way to say that it was sort of almost forced on her, but it was at least passed on to her from her mother, the idea of Christianity, and being Christian.
And so, because that was sort of passed on to her, she doesn’t quite realise the binds that come with it.  Therefore, through these binds, she is uncertain about where to find happiness, or where to find beauty, or how to find them.  So, she is traveling to seek these things out.  Through that, she meets the people of the commune, and as you notice towards the end, she leaves behind the rosary; which symbolises almost letting go of these binds.  Through that, perhaps she is able to seek and pursue and accept love, as well.

​LMD:  Director, the character, Kagu, has a very delicate balancing act in her place in the commune.  What made you sure Hirota-san was the person to play her?
MH:  So, yes, it was a long and difficult road into finding the perfect actress for this role, because I knew it was a difficult role to approach to begin with.  I had actually met Ms. Hirota before, through a different film, through an audition.  I had known about her, other people in the industry had suggested her to me, as well.  But at that time, I, myself, wasn’t quite sure what Kagu as a character was going to end up being like.  So, I knew that whoever I worked with, I would have to build the character of her together {with the actress}.
So, when I finally did speak to Hirota-san about this character, I was very drawn to her eyes: Her eyes are so beautiful, and they were glasslike, and almost fragile; and in her eyes is where I really saw Kagu, as a character.  So, Hirota-san, has quite characteristic features, and also seems as if she is a very strong character, when you look at her physical features.  However, when I did see her eyes, I did see this fragile weakness in there, and through those layers, I felt like I found Kagu.

LMD:  Hirota-san, Kagu is so mysterious to me.  It feels like she’s on a tightrope all the time, in that she can’t let her feelings show, and has to always be subservient to her mother, the commune leader, Onikuma.  Please tell me how you first read her?
Tomona Hirota:  When working with the director, we actually didn’t talk too much about the role, itself.  In fact, I’m hearing a lot of these things as we talk after the film has been made.  Of course, as you know, the film has an almost all-woman cast; it’s a film with a lot of women, but the character isn’t just about the fact that they are all women.  And Kagu, as a character, I wondered whether she was a woman, or a man, or human, or a nonhuman.  I felt that she had this ambiguity to her in many ways.  So, I thought about all these ambiguities as I went into the role, and I tried these out, and I was seeing whether I would get an okay from the director.

LMD:  So, a lot of testing happened on camera?
TH:  Yes, I think that’s true, not only for myself as Kagu, but the other characters, as well.  They stood in front of the director, in front of the camera, and sort of saw how things went. 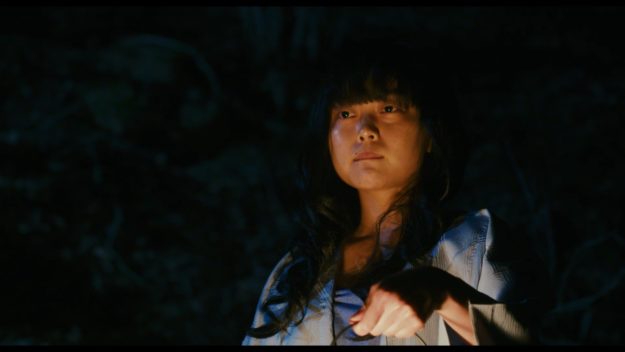