With the rising tide of feminism in South Korea, the fearless, flawed, funny, and fully-realised women of director/writer/actress Jeong Ga-young’s films feel right on time.
With her second feature, HIT THE NIGHT, Jeong unspools a tale of seduction, thrilling, hilarious, and cringeworthy, that turns the tables on familiar South Korean romance tropes.
Dig it!

The Lady Miz Diva:  Your first feature, BITCH ON THE BEACH, created a lot of buzz around festivals.  Was that success part of the impetus to go further and create HIT THE NIGHT?
Jeong Ga-young:  It did surprise me, but that reception didn’t particularly encourage me.  It wasn’t the festival buzz from BITCH ON THE BEACH that led to HIT THE NIGHT.  Actually, the script for HIT THE NIGHT came before the release of BITCH ON THE BEACH.  So, for me, I really wanted to get started on my second feature.

LMD:  What was the inspiration behind HIT THE NIGHT?
JGy:  The actor who plays the main character, Park Jong-hwan, I really wanted to work with him.  I started from the question of what would be interesting thing to work on with him.  So, because, as you see in the movie, he is quite an attractive person, I thought it might be a really fun idea to make a movie that involved seducing him.

LMD:  So much of the film depends on Park Jong-hwan’s reactions.  His portrayal in HIT THE NIGHT was so successful that he won Actor of the Year at the Busan Film Festival.  Please talk about your collaboration with Mr. Park when creating his character, Jin-hyeok.  Did he add anything that perhaps wasn’t there before?
JGy:  I don’t think there was a definite process of collaborating with him, character-wise, because I had cast him already with him in mind.  Then I shared the script with him, and we did several readings, and then we went on to memorise our lines, and then we went straight into filming.

LMD:  The performances are so naturalistic, I’d wondered if there was any improvisational dialogue or ad-libbing?
JGy:  Ninety-eight percent of the dialogue that happens the movie was scripted.

LMD:  Park Jong-hwan is an established actor.  The dialogue in this film is very sexually provocative compared to other South Korean films.  Was Mr. Park comfortable with the dialogue and subjects you discuss in the film?
JGy:  Park Jong-hwan, I feel, felt that the story itself was really fun.  I think we both had a lot of fun making it, as well.  I think he really saw my take on these themes as a very fun and irreverent sort of piece, so I think he enjoyed working on it.

LMD:  The main character bears your name.  Perhaps that might lead people to ask how much of what we’re seeing is based on your personal experience?
JGy:  Definitely, there are ingredients of my own life that are reflected in the film, of course.  But because it’s a film, my basic mindset when approaching working on a film is it has to be more fun than actual life.  So, I think some sort of fantastical elements have also been added.  And I always feel and think in a way that if such and such happened, it will be more fun for the story, or if such and such a thing happened, wouldn’t this be more fun?  So, I always have that in mind when I’m working on it.

LMD:  I’m pretty easygoing, but there are many moments in the film where I cringe watching this character, and hearing some of the things she says while trying to seduce this man.  It’s often said that part of being a great artist is the willingness to expose yourself.  Where did you get the courage to show the world this very unusual character that is clearly going to be confused with yourself?
JGy:  I think that courage comes from loving films more than myself.  I’m kind of cringing saying it right now, but I think my love to make fun films, my desire to make fun films is a big part of what I do, and what I want to do.  I really do enjoy it, whether it’s acting or directing.  I do try to find the fun in whatever I do, and I think that’s a big part of what it is.

LMD:  Another thing I admire is that your character seems to be the antithesis of everything a woman in South Korean cinema is supposed to be.  In terms of being onscreen, we are told that there is a very strict, small standard of female beauty, and a pretty limited depiction of womanhood.  It is extremely rare to see a female character who is not only sexually active, but initiating the relationship, and is even aggressive.  Is it part of your mission to show us that whole other spectrum and a more realistic portrayal of women?
JGy:  I didn’t particularly see this film in terms of man versus woman.  I think more so, because I am a woman, in the past, the women portrayed in TV and film were not very three-dimensional.  I think there were either evil, or either good.  In a sense, this Ga-young character, she is sexually liberated, she knows what she wants, and she’s also very self-assured.  I feel that that is a kind of a character that is hard to see in Korean media, nowadays.  So, yeah, I wanted to do that.  It sounds like I’m bragging, but yeah, that is what it was. {Laughs}

LMD:  Jin-hyeok tells Ga-young he’s offended by her deceit and advances, and she doesn’t really seem to take it in, and continues to push him.  It felt like the reversal of when a man comes on too strongly to a woman, which is also uncomfortable to watch.  Did you consider that people might react poorly to that aspect of Ga-young?
JGy:  I think my answer to your question is that fundamentally I feel that Ga-young’s character, she is not the type to back off, even after learning that he has a girlfriend, and that’s why I think the story went the course that it took in the film.  And even also from the point of view of the audience, I wanted to sort of portray someone who kept on going, even after learning that the guy does have a girlfriend.  The result is kind of devastating, and that is kind of where I wanted to push that character to go to, and so I feel that is also what the audience will feel in the end. 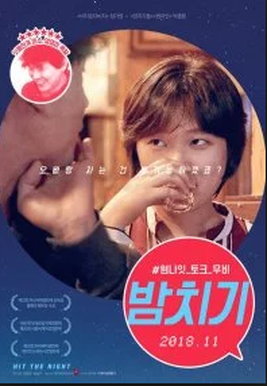