The latest work from Director Nobuhiko Obayashi, is a fever dream of youth during wartime.  Solidly surreal and sweating with sexual tension, the auteur cast his story of teenagers with actors in their twenties, thirties and forties.
At Japan Cuts, star Shunsuke Kubozuka spoke with LMD about bringing the maestro’s passion play to the screen.
Dig it!
​he Lady Miz Diva:  We were all shocked to hear about Director Obayashi’s illness last year.  What was it like to be part of what was an impassioned dream come true for him in making this film?
Shunsuke Kubozuka:  Director Obayashi is someone who, over the past ten years, he grew me as an actor; so, for me, being part of this was extremely important.  It was also a dream come true for me, as well.

LMD:  What was your reaction when Director said you would be playing a 17-year-old boy?
SK:  Yeah, I was surprised. {Laughs} I asked twice. {Laughs} That wasn’t a really a problem for the director, how old the actor, how old the character.  For him, he just wanted them to be themselves.

LMD:  What was it like not only to play a teenager, but one who is growing up in a very innocent era, and so is even less mature than today’s teens?  There has to be a whole different physicality from a 17-year-old from the 1930s, versus a 17-year-old from our current time.  What kind of research or studying did you do?
SK:  As opposed to focusing on how my character moves, or each part of the acting, I focused on studying.  Eighty percent of my research was the historical and cultural background of that context:  What kind of writers were trending?  What kind of music they listened to during wartime?  That’s the kind of research I was doing.

LMD:  As far as the feeling of those people at that time right before World War II, what did your research find?
SK:  For them, too, it was the first time to experience a war.  So, as opposed to thinking, ‘What would they have thought?’ I experienced the war for the first time, as well, as I researched.  So, I was just honest and true to myself, after, with the foundation of that knowledge, what I would do?

LMD:  But in your physical portrayal of Toshihiko, you can clearly see he is meant to be a very young person; he doesn’t have the grace or self-possession of an adult.  I don’t think you can learn that from books?
SK:  I didn’t think each part about the details of the movement, but the one direction that Director gave me was, “You are the storyteller.  You are the scribe.” I am the only one who survives in the story, so I wanted to emphasise the difference; the uniqueness of my character among the rest.  So, once I was thinking about that overarching concept, that’s just how the movements came to be.

LMD: How did you first read Toshihiko?  What did you make of him?
SK:  There is the part in the foreword when it is mentioned that the character of Toshihiko has a brightness that saves everyone -- an innate brightness.  It is a very strange wording, so every time I was confused about the character and the script, I would go back to the foreword and those words, and try to understand the meaning of them.

LMD:  I wonder why he was so stuck on the two friends, Kira and Ukai?  They were terribly glum and depressing.  Especially Kira, who is a dog murderer.  What need did they fulfil in Toshihiko’s life?
SK:  I think this is a description of Toshihiko’s character, but I think he has a cloudless, pure character.  At first, he might seem kind of aloof, but it’s actually a purity.  He has a spongelike character of emotional sensitivity, so, I think that’s something that people around him find attractive, and I feel like that’s how they come to him.

LMD:  Toshihiko seems like the only true innocent in that close group.  Was that to do with his living in Amsterdam before coming to live amongst these people in Japan?
SK:  I think probably his going to Amsterdam is part of his highly-educated background, the book emphasises that, but his purity might be a result of the anxiety and excitement that comes from coming back and wanting to get along well with everyone.  That kind of engenders his purity and his innocence, maybe, I’m not so sure.

LMD:  We never see Toshihiko’s father, and I wonder if that was part of his attraction to Kira and Ukai?  He’s always talking about how “manly” the two are.
SK:  First of all, it’s impossible for him to have paralleled his father figure onto anyone, because at the time, it was kind of common for children to feel like their father was very distant; a cold figure.  But especially for Toshihiko’s case, it is totally on a different level, it’s out of the question.

LMD:  Is it possible the attraction was sexual between Toshihiko and Ukai and Kira?  We see the naked horseback riding with him and Ukai, and the frequent extreme physical closeness with Kira.  Toshihiko doesn’t really seem to be sexually attracted to any of the lovely girls around him.
Later on, we do see one same-sex romance develop, so I felt it could’ve been a possibility.  Did Director speak about that for Toshihiko?
SK:  There was not explicit direction from the director about this, but it’s very clear and obvious from the script.  And I feel for Toshihiko, there is no boundary in sex; he is interested in people as like this fluid thing.  It doesn’t really matter what their gender is.  There is also his relationship with Mina; he does like her, too.  He doesn’t like her because she is a woman, or not, it doesn’t have to do with her gender, as such. 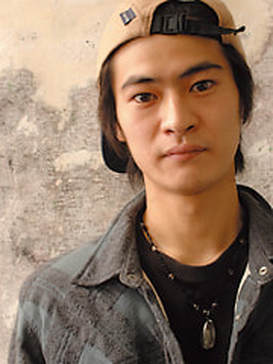