dynamite graffiti
Director Tominaga Masanori and star Emoto Tasuku spoke with LMD about DYNAMITE GRAFFITI, chronicling the life and crimes of Japanese provocateur, publisher Suei Akira.
Dig it!
The Lady Miz Diva:  What was it about Suei Akira’s life that made you think it would make a great film?
Tominaga Masanori:  This is a story that took place a long time ago.  We’re talking maybe three or four decades ago, when Suei was young.  It’s his story.  This includes myself, but I think there’s a lot of points of reference that can be taken from this story for young people.  So, I thought that his life had a lot to offer to viewers.

LMD:  According to the films that this festival has shown over the past few years, there seems to be a cinematic embrace of old style pornography; Pinku eiga, Roman porn, and now Suei’s magazines.  Did you have a sense of that nostalgia, and that have any bearing on the timing of the project?
TM:  In Japan, we don’t have as many biographical films as you have here in the States.  I think all the ones that I’ve seen from the US are very interesting, and they put a lot of effort into telling the stories of people from their past.  In Japan, these sorts of movies have become harder to make, so I think I had a sort of longing to make that kind of movie with an older setting.  For example, many of the films that Martin Scorsese makes; I thought, ‘How does he make these kind of films?’  That was where my interest began

LMD:  Emoto-san, you’ve made many films, but am I correct that this is your first time playing a living person?
Emoto Tasuku:  Yes, that’s correct.

LMD: Did Suei-san personally contribute anything to your performance?  Did you confer with him?
ET:  I did meet him once before filming.  We actually went out to eat and drink together; so that was an occasion we had.  As well as before the actual filming started, he was on set for a period of about five days:  He was there to sort of supervise the veracity of whether we had accurately depicted the era that we were trying to portray.
So, of course, having him, this larger-than-life person on the set was something that made me very nervous as to what he would think of me, but as time passed, I was able to become a little bit more comfortable and open and really appreciate the fact that he was there, and so I took advantage of him being there to really observe him and learn about him.

LMD:  Right at the beginning of the film, there is a great moment that establishes Suei’s character perfectly:  It’s when he’s in the police station, going page by page through his dirty magazine with the vice officer, marking all his offences.  Right after being asked, “Are you mocking society?” Suei contritely agrees with everything the officer says, and then spins around in the swivel chair with a big, manic grin on his face.  Was that in the script, or an adlib?
ET:  That actually wasn’t in the script.  It was something I received as a direction from the director that he definitely wanted to put in.  The reason being is that we’re looking at the magazines, right, and the policeman is saying what he can do and what he can’t, and he’s getting very angry.  Suei wanted to do something else so that the policeman would get angry at him for another reason, which is why he does the rotation in the chair; to just sort of change the angle of the story.  But this was actually something that the director heard had actually happened in real life, so he included it.

LMD:  What do you think was Suei’s motivation in challenging the law over and over?
TM:  In terms of his lawbreaking, this is something Suei thought of.  He always pushed things to the limit -- this might be an issue, this might not -- but he did this so that his readers would be happy.  This was his motivation.
So, every month in his magazine, he would print something that he would be sure to anger the police, and the police are very serious -- the role they have is serious -- but they were not necessarily always on top of things.  So they would get mad sometimes, and sometimes they wouldn’t; it wasn’t consistent.  But every month, Mr. Suei would be going to the police, and in the course of him going every month -- this was portrayed in the movie as well -- but they became close in the time they spent together.  So, the police were getting angry at him, but at the same time, it was almost like they had a playful aspect to the relationship, as well.
For us, looking at his actual story, we were thinking, could this be possible?  Is this a relationship that could actually happen?  Every now and then in movies, we do see depictions of times where the police become involved and they provide some guidance or directions - Nagisa Oshima’s IN THE REALM OF THE SENSES, is a movie that has that sort of portrayal.  In the case of this story, Suei would be going every month, and he signed, saying, “I will never do this again. This won’t happen again.”  So, it became almost a habit, it was something that happened so regularly.

LMD:  Emoto’s portrayal of Suei Akira is fascinating because Suei is such an amiable, good-natured guy, yet there is the very cold growing disconnect that we see in his treatment of the women in his life, and as the story progresses and things become more hectic with his magazine.  Can you talk about crafting that layered performance?
ET:  The director and I had a discussion at a coffee shop; we went over the whole script together -- this is before filming.  We went over the first scene to the very last scene, and I just listened, basically, as the director told me his direction, what he would like the movie to be.
The image for the first half of the movie is something that anyone can relate to; the story of someone’s youth.  But the movie changes tones in the second half to a story of suspense.  And what suspense means is that the person himself -- Suei Akira -- becomes a mysterious figure, we sort of don’t know what he’s thinking in the second half of this movie, which was what the director told me how he wanted to do this.  So, the first half is these ups and downs of youth, and then he’s transitioning to a more mysterious image.
In terms of when that change takes place in the movie, it’s during the meeting when we’re all sitting in a circle, looking at the porn magazine, and my hair is short.  It’s the first scene where my hair is cut very short.  So, that is the point where you see the transition in Suei’s personality, and when that scene was over, the director said to me, “This is where we’re going to move into the transition; where he becomes mysterious or monstrous.’  It’s the short hair.
So, when I made the transition, what I was conscious of is, you did not want to know what Suei was thinking.  The direction I received was that if anything, his thinking would be mysterious, but he’s thinking in a not-so-good direction.  So, if something seems like he was thinking in a malicious way, that’s okay.  The director said what’s not okay is if I made it too apparent what he was thinking, or if I made it seem like he had a very nice expression on his face, that was something he did not want.  He wanted it more in a malicious direction in the second half. 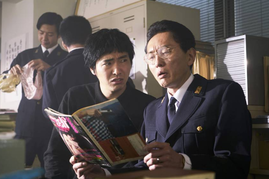