Atmospheric and haunting, Director Thunder Sawada’s DREAM OF ILLUMINATION, tells a story of a Japan that is changing, whether it wants to, or not.  Director Sawada, star Takagawa Yuya, and Producer Kitaki Kazuyuki, spoke to me about the value of a life, and toxic relations.
Dig it!

The Lady Miz Diva:  What inspired DREAM OF ILLUMINATION?
Thunder Sawada:  The script, I wrote myself.  I actually won the grand prize for a very famous Japanese independent script competition.  Through that, I was able to win some production money, and I was able to fund my movie that way.
Regarding the content, in Japan, as well, we actually have something very similar to what happened with Lehman Brothers, the financial crash that happened.  That happened in Japan in the early 2000’s.  During that time, I was actually a real estate agent, and I was working on getting rid of bad properties, and that was my job.  During that time, I met somebody who’s just like the main character, Ueda’s character.  I always thought that if the opportunity arises, I would love to be able to create a work around this.

LMD:  That’s interesting, because I wasn’t sure what time or exact place the film was set in.  Currently, in many places in America, including New York, we are undergoing gentrification, and losing our old neighborhoods.  I wasn’t aware that was happening in Japan, and I wondered if making people aware of that issue was part of your mission in making the film?
TS:  Regarding your question of gentrification, and whether that was part of my aim, that is actually why I have a foreign person come into the story as a character.  So, yes, that is part of it.
But, the other part of it is I wanted to talk about the things that are hiding behind money, and that is a big part of Japanese society, and I wanted to develop a character that is close to that subject, to the idea of money.  That in reality, there are people who are able to make a living out of putting a price on a human being.

LMD:  What was the idea behind filming DREAM OF ILLUSION in black and white?  The cinematography is almost a character in itself.
TS:  Regarding black and white; there are colors that I didn’t want in the movie: Those two colors for me were red and green.  I thought that those two colors didn’t suit the film.  The other reason I used black and white was to get rid of certain details; to get rid of the idea of time, and to give a sort of timeless feeling.  The other reason we got rid of some details is that depending on the person who is watching the film, if they have the knowledge, they are able to understand the price of a place that we were shooting in.  I wanted to try and sort of get rid of those ideas, as well.

LMD:  What drives Ueda?  Why is he so relentless in his work?
Takagawa Yuya:  I believe that when people are harsh towards other people, they are often trying to save something.  I think Ueda himself thinks through his actions here, he is actually trying to save his daughter, and keep her safe.  The other thing is that possibly he thinks that in order to live, this is something he has to do, and it’s to save himself.  That is what I think is driving Ueda.

LMD:  Producer Kitaki, you’ve produced several films that Takagawa-san has appeared in {ROLLING, LOST SERENADE}, did that help pave the way to his being cast as the main character?
Kitaki Kazuyuki:  Of course, there is that reason of having worked with him for a long time.  But the other thing is that Takagawa-san is the one actor who is signed to my production company, and it doesn’t mean that all the films that we produce have Takagawa-san in them, however, I believe that he is a highly skilled actor, and a wonderful actor.  So, it is true to some extent that when I am reading scripts, I am immediately thinking about what Takagawa-san can play.
But regarding the script, there was no question, I knew immediately that Takagawa-san would be perfect for this character that he played.  So, I discussed it also with the director, and it worked out very well.

LMD:  Director Sawada, Ueda is a character who always seems to wear a mask, like Elen says, “Of course, he’s a good guy. He has to be.”  It’s a very delicate performance.  How did you and Takagawa-san create those delicate notes for Ueda?
TS:  This is sort of an indirect answer to your question, however, Takagawa-san was the first person we cast for the movie.  After he was cast, we had eight months of preproduction, and during that time, we went drinking once a month, and we created the character that way.  I don’t quite remember the specific details of what specific changes were made during those drinking times, but changes to the script were also made at the same time.

LMD: Takagawa-san, can you elaborate a little more on what went on during those drinking sessions?
TY:  {Laughs}  I also don’t remember too many of the specifics, however, there were three books that I was asked to read, and I read, that were written by a real person called Mr. Ueda, who was actually a real estate agent, and who had written these books.  So, I was reading and drinking, and we would talk together about the various things that surround these people in the story, and that’s how Mr. Ueda was built.
TS:  I do believe that through these discussions together, we were able to create something that is very much of today, and of its time.  These are very minute details, but we even discussed about what kind of glasses Ueda would wear, or the working clothes that he wore.  Those things were actually discussed at this time.

LMD:  I wondered about Ueda’s psychology; if he was a deeply angry and vengeful person?  He is buying homes from people who have lived there forever, and changing their neighborhood, and creating a lot of chaos.
I thought perhaps part of the reason he does that, and seems to have no feelings about it, was because his own home life was turned upside down when his wife left him, and he had to take care of his child on his own?
TS:  This is a difficult question – and I knew I was going to get asked something like this – but my intention with the film here, was I often am thinking about Freemasons, or different conspiracy theories, and things that happen.  I often wonder why these people exist.  But I did start to think that often people who are doing harsh, or possibly mean things, that there is usually a human motivation behind it, and perhaps that person is actually living quite a normal human life.  So, I wanted to project those ideas onto the screen.

LMD:  What is Nana’s place in the film?  She sort of floats through the film, like a light in the darkness, but there is no gravity to her.  Why doesn’t she seem surprised by her father’s monstrous revelation?  Yet, even before he reveals his secret, she is intending to separate from him.  What does she represent?
TS:  So, one thing that I knew about this character in the beginning, was that this person was going to be a young character, so, I had that in mind.  But then, the other part is that, the father may be doing horrible things, however, they have that bond of child and father that they cannot get away from, whether that be economically, or the fact that they share blood.  And so, by creating those complications, I wanted to also give a little bit of lightness to the reality.
And I do believe that there is a reality to their relationship, which is that because Ueda is her father, she has to forgive to some extent.

LMD:  There’s one moment when he’s talking about the incident from the past, and he insists to Nana that he knew “from experience” something would happen.  What did that mean?
TS:  This relates to a book that I read, a book about data.  One of the things that the book talks about is what leads to an army leaving a place?  For example, in the US, the book said that it counted one man’s life to be worth ¥20 million, as opposed to in the Middle East: Their calculations is that one man’s life is worth ¥7 million.  Different countries make these calculations of how much money needs to have been lost for the Army to decide to have to leave, and call it quits.
And so, there was a conclusion to the book that basically said, that these calculations actually lead and connect back to the advertising industry, as well.  So, that gave me a good shock to the brain.  When I read it.  It really made me think, okay, I want to somehow represent this within a story, within a film.  I’m not entirely sure whether this is quite communicated, but that was some of the ideas behind it. 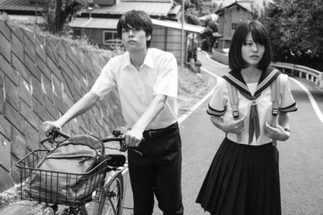