In the crowded world of movie adaptations of Japanese manga, Director Shinsuke Sato has carved a high place for himself, helming critically-lauded live-action versions of GANTZ, I AM A HERO, 2016’s DEATH NOTE, and INUYASHIKI.  Sato-san set himself quite a challenge by taking on the immense world of Kubo Tite’s fan-favourite, BLEACH, the story of a not-quite-average 15-year-old boy who sees dead people.

​BLEACH, Director Sato spoke with LMD about supernatural samurais, CGI, and giving the fans what they want.
Dig it!

The Lady Miz Diva:  Director Sato, I’ve asked other filmmakers who’ve adapted manga about adapting BLEACH, and every one of them said it would be “too hard.”  What made you take up the challenge?
Shinsuke Sato:  Regarding BLEACH, of course, I liked BLEACH from the very beginning.  It’s always been something very interesting to me.  Also, something regarding in a different matter, I’ve always wanted to make a film that had sword action, but that was set in today, or contemporary times.  I always felt that sword action movies doesn’t always have to be jidaigeki, but instead can be set in this contemporary time, now, and that perhaps Japanese films should have more of that kind of film.  So, the film buff side of me wanted to do this kind of project.  That said, if I were to make this kind of film through an original script; it’s harder to manage to receive a budget, and actually make this project happen.
However, then, BLEACH came about to me.  And I liked BLEACH to begin with, but it also allowed me to play out this dream as a filmmaker, as well.  So, in a lot of ways, I wanted to intensely do this project; I had a want to do it.
Also, visually speaking, in my past works, for example, with DEATH NOTE in 2016, I incorporated CGI to do the Shinigami character.  Also, in my past work, GANTZ, I also had an action and CGI combination happen within my films.
So, in a lot of ways, through my past work, I’ve been doing some trial and error.  So, through that, BLEACH itself as a project, I worked in it for three years: It was finally in that moment that I started working that I felt like, ‘Okay, now I have the confidence to be able to do this film.’  I felt that I could finally do it, and of course, I really had the want to do it.

​LMD:  How were you able to break down the enormous world of BLEACH into a movie-sized fragment?  You began your career as a screenwriter; I wonder if that experience helped you to pare the large story down to its essentials?
SS:  When this project started, there was already a screenwriter who had spent quite a significant amount of time working on the script.  This was a different scriptwriter.  However, as you said, it is very, very difficult to put this world of BLEACH into two hours.  And so, as you mentioned, I had been working as a screenwriter; I have experience in screenwriting, so, I, in fact, joined the scriptwriter in writing this script together.  Finally, we were able to come to a script that we could agree on.  We did spend a lot of time on the CGI with this film; we spent about a year, but the thing is, we spent almost the same amount of time working on the script in order to make this happen.
This film itself is about one hundred minutes; if you take away the credits, it’s about ninety-five minutes long.  So, really, you rush through the plot, and you rush through a lot of BLEACH within this short amount of time; but within this time, I wanted to make sure that BLEACH’s essence and the story was there.  And also, that it was something that could be presented to those who weren’t very familiar with BLEACH, either.  But then again, I also wanted to make sure that it doesn’t become a summary of BLEACH; these were the considerations I was making.  I also wanted to make sure that it was sort of kind of a boy-meets-girl story, as well, which you see within the film.
And so, all of these things are things that I considered, and therefore, I took a lot of time in building up the script.

LMD:  I’m curious what you were allowed to change, and perhaps what you had to keep in?  There were some differences, or new looks at things in the original; including the layout of the Seireitei, but as you know, Ichigo’s evolution is a huge part of the story of BLEACH.
In the manga, our first glimpse of his evolution is evident during this film’s timeframe, but we don’t actually see that onscreen.  It made me wonder whether this film was planned to be a self-contained, one-shot movie, and so loose ends were avoided?
SS:  One thing that I was told by the original mangaka, Kubo Tite-san, had asked me to keep, was the relationships between the characters.  He wanted me to be very true to that, to the original.  Which is a promise that I kept.
And one more, the other thing that I tried to keep, was that in Japanese cinema, we are unable to ensure that there will be part ten, or that there will be a franchise; it’s just impossible to budget for something like that.  It’s not like the TRANSFORMERS series, where you know that something else is coming up, because we are working with a limited budget in Japan.  So, I really wanted to make sure that the audience is able to enjoy it with this one film.
So, in other words, what we did was pour all of our budget, and all of our efforts into this one film.  And as I said, it’s just impossible to develop a project in a way where we know that we’re going to have part two, three, and four.  Both myself and the producer felt that we don’t want to make a film where we pretend that there is going to be a part two.
It’s true that a lot of people have asked me whether there is going to be a part two to BLEACH, and to be honest, both myself and my producer really want to make part two, but it all really depends on how well the first film does in the box office.  I definitely didn’t want to make a BLEACH movie where, if there wasn’t going to be a number two, I didn’t want to make a BLEACH movie that became indigestible to people.  I also wanted to make sure that people who don’t know the manga can still enjoy it, and can still understand what the movie was doing.  In that sense, there are differences from the original in order to be able to achieve that.

LMD:  From the GANTZ films, and INUYASHIKI, and now here in BLEACH, your visual effects are so impressive.  What was the most challenging visual for BLEACH?
SS:  In the original, the fight with the Grand Fisher, the fight with Renji, and the fight with Byakuya; those happened separately, but within this film, I actually cut these episodes together.  The scene where Ichigo fights with the Grand Fisher in the original happens in the forest near a graveyard, and then the other two happen in the streets.  Then there’s a part in the original, where he fights Fishbone, and that also happens in the streets.
So, I decided in the final setting of this film, in the climax, I wanted to create a set, which is Karakura Town station.  Karakura is the town that you see throughout BLEACH, so I wanted to create a station front, and set the scene here.  This is the setting that doesn’t appear in the original, but I wanted to make this a sort of important factor within the film.  This Karakura Town station in the film is built by actual studio sets, but also with CGI, so it’s an imagined place that’s created by these two things, collaborating together.

​So, in the final fight scene, you start off in the graveyard, but then it goes into this station setting.  This setting, I wanted to make sure it dilapidates to something that doesn’t look like today’s Tokyo by the end of the scene.  The Soul Society doesn’t show up in this movie, but I wanted to make it seem as if it suggests Soul Society in the way the town ends up.
And so, working with the set, and the CGI together -- a lot of the background work was done by CGI, and of course, the Grand Fisher monster is a CGI -- but then, within that scene, there’s also the human versus human fighting that’s happening.  Then there’s the Grand Fisher, and action; so all the action has to be very high speed with the Grand Fisher.
That was a lot of challenges that I attempted, but I believe that I put all my experiences from my past work all together, and tried to challenge myself to go beyond all my past experiences, and really gave it my all, and tried very hard.  In order to get to this place, it really did take a lot of preparation. 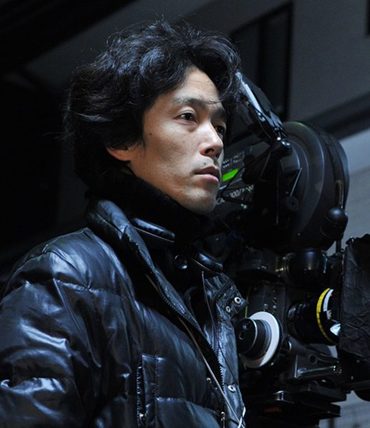